Superior looks don't always translate to a superior experience. Many brands redesign a logo or packaging just to get you to try the same old product.

But sometimes, improving a product's appearance means a better user experience by definition. That's what happened with American Time's new Power over Ethernet digital (PoE) clocks, an upgrade resulting in a product that works as good as it looks.

Like the previous model, the PoE Global clocks get both their power and time signal from an Ethernet connection without the use of a master controller. The new model marks an evolution from the previous generation by bringing upgrades in both appearance and functionality — and providing proof that those two things can be one and the same.

When tasked with designing a new PoE clock, the engineers at American Time cranked up the brightness of the digits that comprise the display, making for a crisper look but also making the clock easier to read. This improvement was made for schools, factories, and hospitals that choose a digital clock over the analog variety due to its better visibility.

Digital clocks are most effective in large rooms and long hallways where an analog clock can present problems of readability. A brighter display, then, makes digital clocks that much more effective in scenarios where telling the time without squinting can prove challenging.

Digits That Do More

Aside from being easier to see, the digits displayed on PoE Global can do more things. Some users will especially benefit from the clock's new built-in elapsed-time indicator.

Counting up or down, the indicator is perfect for marking passing time in schools. Hospital staff will also appreciate the feature for the help it provides during time-sensitive medical procedures.

Another benefit to hospitals includes the addition of the Code Blue trigger, an override function that forces the unit into a special count-up mode. While Code Blue is activated, the unit's other functions operate in the background.

Although PoE Global has additional functions, it still has the same helpful modes the regular PoE system had. That means popular features such as the calendar function remain intact. 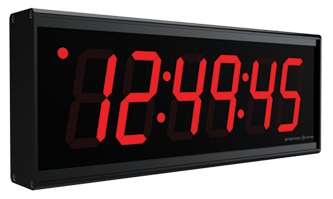 While the digits on the clock can take on more configurations than before, PoE Global also comes with a sleeker look befitting the world-class aspirations of any boardroom or classroom.

The clock's polished black, anodized aluminum casing provides a durable finish and a sleek look. The refinement continues with further touches, all the way down to the screws — they're now recessed into the casing, lending a greater sense of elegance.

All the while, PoE Global retains the primary benefits for which PoE is known. PoE clocks stay synced without the aid of a master controller. They update to Daylight Saving Time automatically. There's no need to worry about a power source other than your ethernet connection, which means no batteries to change...

This saves on maintenance costs and means you have one less thing to worry about as you keep your facility running on time and looking good.