How Can a University Benefit from Synchronized Clocks? 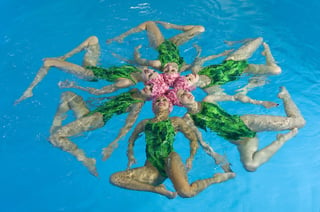 A synchronized swimming team and a university campus have more in common than meets the eye. Just go with us on this. Like a synchronized swim team, a campus has many different programs to coordinate and a lot of moving parts. If one building has a different time than others, it can throw off the schedules of students and staff for the rest of the day – in other words, the routine is ruined.

To keep your campus running like clockwork, it might make sense to start with a system of synchronized clocks.

While it might seem daunting to keep your vast array of classroom clocks telling the same, accurate time, it doesn't have to be an arduous chore to install and maintain the system of clocks that keep your campus humming. Here are three ways a synchronized clock system can benefit your university, and how one college made the switch.

There are countless classes occurring at various times in a variety of locations throughout the day at any given university big and small, so punctuality is key for both professors and students. For example, a student may have to walk from one class on the east end of campus to a class on the west end in only 15 minutes. That student expects the professor of his first class to end on time and plans to make it to his next class on time as well, without missing any prominent information. If each professor misses the correct release time by 5 minutes in opposite directions, that gives the student only 5 minutes between classes. The only way to ensure that doesn’t happen is to have synchronized clocks across campus.

Changing the clocks for Daylight Saving Time in your home, car, and on your wrist is a big enough pain. Now, imagine having to change hundreds or thousands of clocks in different rooms of different buildings throughout an entire college campus. It could take hours! Fortunately, a synchronized clock system automatically updates the time on every clock around campus.

Now that you don't have to worry about changing every clock on campus for Daylight Saving Time or making other adjustments, you have more time to work on other areas of the school. You likely have more prominent issues to address than accurate time.

Saddleback College's campus in Mission Viejo, California, sits on 110 acres of rolling hills. The school has 26,000 enrolled students. After the campus expanded and the clock system began to fail, staff members started looking for a new system that would keep better time.

Doing their due diligence to research and test thoroughly, Saddleback examined four vendors and tested out three systems, ultimately choosing our SiteSync IQ wireless clock system. They decided to go with a combination of electric and battery-operated clocks to fit in the different types of space, but are all able to sync with the same master clock. They also took advantage of the free customization and had the school's logo put on each clock face.

The school's lead electrician, Jerry Doolittle, said the system was easy to install and operate. The college now has approximately 450 clocks across its campus and never has a problem losing the signal, even on their hilly campus.

It's likely you've never given a clock a second thought unless you noticed it was inaccurate. A clock that is slow or fast can hinder punctuality and productivity no matter who you are, and it can be really frustrating to deal with. Fortunately, if you have a synchronized clock system, you don't have to worry about that.