Set the Standard: How To Ensure Accurate Clock Synchronization 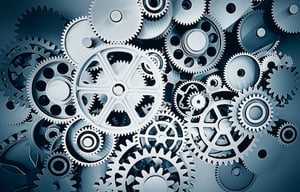 For anyone who takes direction from someone else — so, virtually all of us — it can be comforting to realize that your boss has a boss.

You might be told what to do every day and work under intense scrutiny, but the person scrutinizing you is also under pressure. See? Your boss is human, too.

But not all authority figures are human. Take, for instance, the clock on the wall. In a time-sensitive scenario, the clock is your boss, and if it's part of a synchronized system, the time it displays supersedes all other competing sources, such as phones or computers.

But even this boss has a boss. In the U.S., it's the National Institute of Standards and Technology, known as NIST. NIST derives its time from the ultimate authority — a collection of atomic clocks.

If your facility uses synchronized clocks, you want those devices to sync with the NIST system to ensure accuracy and reliability. If your clocks aren’t synchronized, read: Why Time Sync is Important.

There are a few ways to accomplish this, but we'll make your choice simple: Using an internal server IP address is the best option for organizations, both large and small.

By connecting all your organization's devices to one in-house server that is tied to NIST, you are minimizing risk variables and simplifying your entire time system.

Let's look closer at the various options for connecting to NIST and why an internal server IP address is your best choice.

If you choose not to use your own internal server, you can connect to NIST directly. NIST servers allow clocks to connect directly through one of several IP addresses. But that has some potential drawbacks worth considering.

A single NIST server can go down without warning as they're subject to both hardware failure and network traffic pressures. Plus, if a site queries a server too many times, service can be denied, making a direct clock to NIST connection far from ideal for large organizations.

NIST IP addresses are also subject to change. This happened in 2017, when the servers received an upgrade resulting in new IP addresses and the discontinuation of some servers. As a result, some organizations noticed their clocks weren't syncing, which many didn't discover until the clocks failed to adjust to Daylight Saving Time.

Connecting to a Pool of Servers

One way to solve the problem of relying on a single server is to connect to a pool of servers instead. Handily, NIST provides this option by suggesting that users link devices to https://nist.time.gov/. However, not all devices, especially older products, are capable of connecting to a URL and can only link to an IP address.

Other drawbacks of external pool servers are devices connected to different servers can receive slightly different times. Or if multiple devices connect to the same server, they could be blacklisted.Also, going this route means you are still contending with external network traffic which can lead to various problems. One problem being limited bandwidth, which has the potential to slow down the entire network. Another issue is that each device could take longer to get a time response.

Deploying Your Own Server

You can considerably reduce external network traffic and other potentially harmful variables by establishing your own server. Part of your intranet, an internal server IP address, can be located on a pre-existing server if you are connecting a couple hundred devices, or located on a dedicated server if you're handling thousands of connections.

Your own server will still receive the time from NIST, but if an IP address changes or a NIST server goes down, you don't have to scramble to reset each of your directly-connected devices, just your own single server.

By using an internal server IP address, you can be confident that all your devices are getting the exact same time since they are all connected to the same source.

This option gives you the best combination of reliability, efficiency, and security.

The decisions involved in choosing a synchronized time system extend well beyond your method of network connection. American Time has a variety of options for synchronized time networks and several types of clocks.