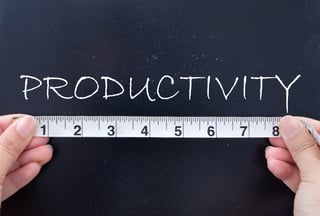 You've seen it in the movies: The band of action heroes is about to save the world by executing their carefully planned mission. But first, their leader issues the command, “Synchronize watches.” It's a cinematic trope, and for good reason. It makes sense that a tight-knit team would need to be working off the same time as they put their complex plans in motion.

Maybe you aren't saving the world, but your manufacturing facility relies on calculated efficiency nonetheless, and that starts with the clocks. You might have hundreds of them, and making sure they all tell the same time can pay huge dividends — as in, real money.

The process of turning raw materials into marketable goods can be a complicated one, so you don't need further stumbling blocks due to wasted time or scheduling conflicts that are more likely when your clocks are out of sync.

Take food production, for instance. That process might involve assembling ingredients, mixing, cooking, and freezing. It happens in one seamless motion. That's the goal, anyway.

If any of these actions are out of step with another, everything gets thrown off and your production line doesn't hum as designed. Maybe product sits around too long and takes a hit in quality. Or machines languish as they wait for more work.

Just as bad as downtime for equipment is downtime for people. You're not paying employees to sit around, but if they're clocked in and they aren't able to do their jobs because operations are out of sync, that's exactly what you're doing. All the while, the clock keeps ticking.

If your clocks are in sync, you're more likely to avoid the conflicts and frustration that arise when people aren't on the same page.

If your collection of clocks don't keep accurate time, employees may turn to their own clocks, relying on cell phones, computers, and other devices to stay on schedule. And if those clocks don't match your company's, you could have several employees showing up late for their shift and throwing your whole system off course.

This is something DMR Electronics, an industrial manufacturer of wire harnesses, learned before turning to American Time for help.

There were arguments over whether employees were tardy or not, and workers took advantage of the out-of-sync clocks by leaving early for breaks and coming back late. Plus, the problems extended beyond the factory floor, as employees debated whether meetings were starting and ending on time.

As DMR prepared to move into a new 60,000-square-foot facility, it made sense to address those timing conflicts with a new clock system. The company chose American Time's SiteSync IQ Wireless Clock System, which brought precision and enhanced control to the new facility's timekeeping.

The result was that DMR could enforce its rigid clock-punching policy and keep meetings on schedule. “Now, every meeting starts on time and we can hold everyone accountable," Dave says.

So, if you're experiencing tardiness, an unproductive process, and too much employee downtime, you may want to check your clock systems. If they're not synced, we recommend investing in a synchronized system. It will help your business all around.