High-quality clocks that stay in precise synchronization must have access to two important sources to operate successfully: A power source and a time source.

However, terms like “wireless clocks” and “wired clocks” are commonly used but often misunderstood. In this article, you’ll learn more about these terms and what they mean for synchronized clocks in your building.

Synchronized clocks need a source from which to pull the accurate time. Their ability to access that source might be through a wired connection or a wireless connection.

Wireless clocks get their time source over the air, such as through a Wi-Fi network or a wireless transmitter that gets its time source from a NIST time signal, GPS, Internet time server, or other source.

In either case, the wireless clocks are synchronized through the air. The power source for a wireless clock is typically a battery, but it can also be an AC-powered electrical connection, depending on the type of clock.

In the end, these clocks are referred to as “wireless clocks” because they get their time source – but not necessarily their power source – wirelessly.

Wired clocks get their time source from a wire, such as an Ethernet cable. The clocks are typically powered by a single cable that has multiple wires for power and time correction. For example, Power over Ethernet clocks draw both power and time updates from an Ethernet connection to your organization’s network.

In summary, wired clocks are called “wired” in the industry because they get their time signal from a wired connection. 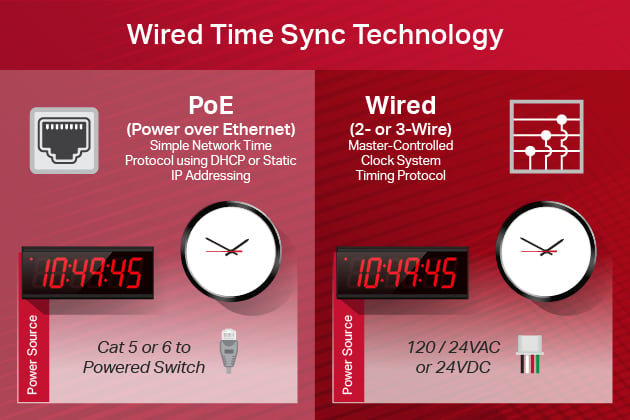 The bottom line: Which term to use?

In the clock technology world, “wired” and “wireless” usually refer to how the clock retrieves its time correction. The actual power source for the clock may vary.

For example, if a clock is wireless (like a Wi-Fi network clock), it does not have a wired connection circuit to the time source. That same Wi-Fi network clock could be powered by batteries or it could be plugged into the wall. The choice depends on the customer’s preference and building infrastructure.

For more questions about clock technology and which power or time source is best for your building or campus, contact our clock experts or call us at 1-800-328-8996.